Power BI is a group of products built and owned by Microsoft Inc. There is a desktop edition, a “cloud instance”/ SaaS edition and a “webserver” edition. They all have different features. This article is mostly focussed on the SaaS version, as this has the best match to the other products in this range of articles. For an important diagram on how the products relate 1 : 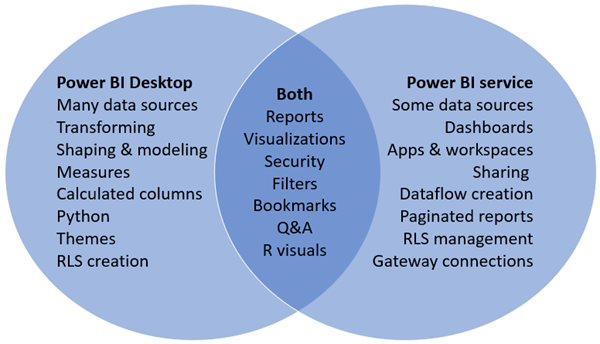 As would be expected from a large corporation; the licensing is complex 2 Pricing to share reports with people 3. You can buy at scale, or at the individual level. Please read and understand be making an investment, but licensing is not a technology thing.
@--They 4 do not know how to draw an architecture diagram, but this does contain more data than the MSFT website++ @

As far as I can tell MSFT conceptualises “data” as “an excel file”, not a stream. As it is a fixed size bucket/file, it can easily be ported into other formats. In particular to graph making, all my experience is that the data is a continuous stream.

(this is the SaaS/ Cloud instance product)

Most of these points come from 20

Some similar articles in research